Our current cannabis trial is looking at an innovative impairment testing device called the Cognalyzer™. We were able to sit down and talk with its inventor, Israel Gasperin, to learn more about it and his company, Zentrela.

Hi Israel and thanks for joining me. Congratulations on starting Zentrela and inventing the Cognalyzer™.

Tell us a little bit about you. Where are you from?

Israel Gasperin: I’m from a town in Mexico called Xalapa, just on the eastern side of the country.

Where did you go to school?

Israel Gasperin: I did a Bachelor’s in Software Engineering at the Institute of Technology of Xalapa. After that I did a Master’s in Entrepreneurship at McMaster University in Hamilton, Ontario, Canada.

Why did you choose to study entrepreneurship?

Israel Gasperin: After my undergrad I was working in the financial sector in technology, but I just wasn’t passionate about it. What I was passionate about was starting my own business. So, I eventually decided to quit my career and go back to school to learn about starting a business.

And is McMaster where you started to think about using technology to analyze brainwaves?

Israel Gasperin: When I was younger, I first learned about wearable electroencephalogram (EEG) devices for meditation. I was just so fascinated that it was possible to analyze brainwaves to determine how well you were practicing meditation. So, it was before McMaster when I really started to think of a product that could be designed and have a useful application – and this is when I thought of a device for driver fatigue management that I presented to study at McMaster.

For drivers of motor vehicles?

Israel Gasperin: Yes! The brain is the first organ in our body that is affected temporarily by fatigue or cannabis. My idea behind measuring brainwaves was to predict, based on brainwave analysis, when drivers were in the process of falling asleep before they were in high risk of committing a mistake while driving. So, I did my masters project on proposing the development of such an EEG device that truck drivers could wear in their hat that would alert them when they became too tired to drive safely.

How did that go?

Israel Gasperin: I graduated and continued working on the project. I had many meetings with truck companies but there wasn’t much interest. But this was early 2016 when cannabis was just becoming legal in Canada and people kept telling me that the device might be perfect to help detect cannabis impairment.

So that was sort of your ah-ha moment?

Israel Gasperin: Yes! But the work wasn’t done yet. It took me two years to develop the technology and undertake some internal validation. And then in early 2018 the Ontario government released funds for the improvement of cannabis impairment testing and all my friends saw this in the news and were like ‘hey, look, this is perfect for you!’

Israel Gasperin: Yes, it sure was. We ran a feasibility study using a $100,000 grant from the government to demonstrate the accuracy of algorithms, for example, that alcohol impairment or other things like migraines, fatigue, or other non-THC impairment states didn’t produce false positives. And it was during this testing when we started to see that six out of ten people who were testing positive for THC in their saliva weren’t showing any type of cognitive impairment with the device.

And that’s is the real potential benefit of the device for both law enforcement and users.

Israel Gasperin: That’s correct. We see this as an aid to help drug impairment experts make more accurate cannabis impairment detections – a real benefit to society, including the cannabis smoker who might have residual THC in  their blood, saliva, or urine but not actually be impaired. Plus, it’s fast and easy-to-use so it will make their jobs just that much more efficient.

So, explain how the Cognalyzer™ works.

Israel Gasperin: You put it on your head, sort of like a high-tech headband. It performs two 2 ½ minute brain analyses while the algorithms detect whether the brainwaves are altered by psychoactive effects of THC. 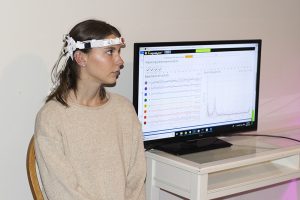 Is it safe? Are there any risks?

Israel Gasperin: EEG technology has been used for over 100 years and is very safe. The Cognalyzer™ is just like the ones used in hospitals but very portable, light, and once on the market, affordable for commercial use.

What other industries do you see using this?

Israel Gasperin: We’ve seen a lot of interest from workplace safety applications. And we are seeing plenty of interest from cannabis producers and researchers who want to use the Cognalyzer™ to more objectively measure the effects of cannabis so they can more accurately produce products with predictable effects for the user.

This all sounds like the Cognalyzer™ could be a real game-changer and we’re excited about working with you for this study. Quick question: Why did you choose to test the device here at KGK Science?

Israel Gasperin: During the exploration process of contract research organizations (CROs), I found that the leaders of KGK are experts and visionaries in the cannabis industry. They understood exactly what we needed and provided an accurate study proposal – they understood what we had to do – something that other CROs did not. I also knew that KGK was part of Auxly Cannabis Group and knew that Auxly is one of the top cannabis companies in Canada, and that gave me a lot of trust.